Mother wrote you yesterday just after the fearful fire that has come upon us – I was up and dressed when I first heard the gong & knew at once that something was wrong – running to the  window  saw an immense cloud of smoke that almost enveloped the main Armory in its dark folds.

I ran to Dick’s room & the short time I was in going there had been long enough for the great tongue of flame to shoot up through the roof.  I waited a few minutes and then put on my things. I went down to the nearest point it was safe to go, and watched roof and floor after floor, wall after wall fall into the fiery pit, covering thousands upon thousands of dollars worth of the superb machinery – the living representations of my dear husband’s great mind & genius & to be so powerless to help save one thing from the general ruin was so hard to bear.

The great dome fell with a thundering crash – the great gong, rung only by the hand of the fateful fire, moaned on until almost the last, like a sad, dying wail for the dear old Armory the Col. loved & was so proud of – a dirge for its departing glory – it seemed as if another link between him and us was broken – nothing of the original Armory being left but the forging & blacksmith’s shop – the poor fellow was buried beneath the burning mass in trying to save some of his tools

Our men almost all behaved splendidly – the fireman caused more loss than it is easy to forgive them for – had they not been there, our men would have saved the office, none of us doubt – the fireman broke into the wine cellar & many of them were drunk –

well dressed people among the crowd stole pistols right and left & some people behaved in a way to make one more disgusted with humanity than it is good to be. But the mass of the immense crowd was kind & good, & did all they could & their sad faces showed they knew Hartford had met such loss as they could not well bear

There is scarcely a doubt in my mind but that it was the work of an incendiary – the place, the time, and the other suspicious circumstances make it almost a certainty to my mind – you know it was threatened three years ago by the rebels, & I believe they have accomplished it at last.

Some arms were saved – & the books & papers – had we only been able to save the office half a million would have been saved to us.  Everybody is so kind & sympathizing – Dear Mr. Doane came at once – Mrs Barnard, Mary & Aunt, Dr. Clark, Caroline Floyd, Julie, Gov. Seymour [who gave Sam two “colonel” honorifics], Mr. Holland were all here yesterday – today old Mrs. Beach, Mrs. Sigourney, Mrs. Grey & Hallie Chapman, & one & all express their sympathy & sorrow, & none spoke of it without tears –

Hartford feels now, if never before, what the Col. did for it. Mrs. Brownell sent down to see how we were, & Mrs. Doane has sent me such a sweet note – so you see that friendly sympathy does all it can to lighten ones trouble –

I have sent you the Press – which has the best account of the whole circumstances – we think [a wink?].

“Mr. Morgan’s telegram was received this noon – I have not answered – I hope you won’t hurry back until your visit is finished – for you know there is nothing to be done but wait & bear it as we can – & you know that it is so small compared with the other troubles that I have had to endure that it is easy to keep up.

Collie says, “Mama we must answer Aunty letter, we have not written yet-“ & I have promised to write for him tomorrow – You must enjoy all you can & not let this thing trouble you too much – for we are all well at  home – Lib is improving & poor John is crushed – he says he feels as if he had lost his home– and Mr. Root [Elisha Root, President of Colt’s], though much grieved keeps up good courage.

With Mother’s and Father’s love & all the family’s I will close  –  Grace Rogers & Sarah Brown have just been here & sent much love – Bessie & Lannie are to come up on Friday & come here. Webb is back, ordered to Fort Trumbull -- Little Collie has gone up to see miss Charlotte Merriman – she came evening before  last.

Ever your affectionate sister,  Lizzie

This has been a very sad morning to us - the Armory, the pride, and pet of our dear Col. has been consumed by fire – and the office, where so many years, he sat, and labored -  about 20 minutes after 8 o’clock, we heard the gong, and it being so unusual an hour for it, that dear Lizzie was at once alarmed, and ran to the window to see if she could ascertain the cause – and got there in time to see the flames burst out from the roof.

The whole household were immediately aroused, and the male part of it, started at once for the spot but the fire had got such headway, that it could not be controlled, and the buildings now lie a mass of smoking ruins - I felt at this moment, that it must be the work of some evil minded person - but I hope not.

Very few of the arms have been saved, but all the valuable papers have you will be glad to hear.  Richard has just returned, and he says the fire originated in the polishing room, but nobody seems to know how - the oiled floors made it burn like tinder, and filled the building with such a dense smoke, that the workmen were obliged to quit without saving their own things.

Dear Lizzie did not wait for breakfast, or carriage, but went on foot to the scene of destruction and remained till the office was almost consumed -  we are all feeling badly enough, so many men thrown out of employ, and such a terrible loss of property, but dear Hettie it might have been worse  - had the wind been high – as it is, the new armory is spared, and many of the shops – and no lives were lost

Mr. Doane has just been to see dear Lizzie – he had been down to the ruins, & felt so    bad, that he said he must come & see Lizzie.  I dare say you have heard this sad news by the Telegram, but I thought you would be glad to hear by letter.  Everybody sympathizes with dear Lizzie & the family.

I do not know but it will make Lib [wife of John Jarvis]  sick again for everything worries her so much – they cannot get a house to move into – and that troubles her .  She and our family unite with me in best love  - little Collie said when the fire was at its height – “had you not better telegraph to Aunt Hettie to come home.”  I told him you could do nothing were you here.  Mrs. Barnard has taken him up to her house to play with the children

In haste dear Hettie, but with much love.

I sent you some papers yesterday giving you a little idea of how Hartford feels the loss – feels it today as never before how much they all owe to him who is not – there have been some very touching tributes to his genius & energy in the papers – it is sad to see the men who for so long labored with & for him – they look like men who have lost their nearest families & homes by one fell blow.

– Poor John he cries like a woman and he says he feels as if his home is gone – Mr. Doane says he has been perfectly astonished to see the feeling among all classes of the community – that all mourn as for a personal loss – your letter came yesterday noon –

I am sorry you feel so distressed & hope now that you have our letters & know that all is well with us at home & that we can do nothing – that you will feel like staying & enjoying all you can for the rest of your visit – I did not feel as if I could smile on Friday – my head ached so badly – but mother wrote at once in time for the noon mail & I wrote on Saturday both of which I hope you have.

The work of demolition is going on the walls being taken down to ensure the safety of workmen in taking out the remains of that glorious machinery, pipes &c &c.   I have been in the Col.’s office, twice I went there to see him, but Sunday when I went down to see the ruin, I felt if it were possible for me to get there I would like to go once more. 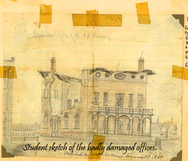 We went up the charred & broken staircase & such a scene of ruin you can hardly imagine – Dick’s room & all that corner of the building is quite destroyed – the east wall of the Col’s room is still standing & pretty strong – but the south one is all gone & a portion of the floor, while what remained is covered to a depth of two feet, I judge, with ashes & other debris of the fire – the view of the ruins from that room is grand & sublime & as sad as grand.

But every one is kind, & all feel that they have lost much too. 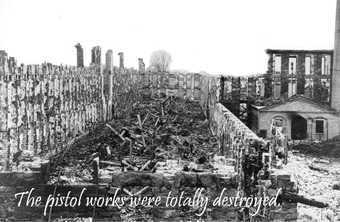 The Phoenix Bank did a very handsome thing on Friday after the fire – there was a meeting of the directors & there passed an unanimous vote directing the president to the entire resources of the Bank at the disposal of our Company. This is very gratifying, although we shall not have to call on any outside aid unless something else happens.  I suppose that we shall get about $300,000 from the insurance – this is better than nothing.

I had a beautiful letter from Amelia last evening and from Mrs. Hall – both seem to feel very much for us.  I had a very nice letter from Mrs. McClellan.  She says if you go to Alexandria to see the fortification – she hopes you will try to see her for a few minutes. She lives 122 Prince Street – Aunty was down her yesterday – she has a bad cold – Lillie Parsons too has a very bad cold and is quite hoarse – the invitations are not out here yet.

Bess & Lian Rogers are coming here Friday & Dr. & Mrs. Rogers Monday. I would not come back on purpose for that as it will so soon be over & then you cannot get back to finish your visit there.

My love to all friends – I meant to have written for Collie but do not seem to find the time – he is going to a party at Hattie Robinson’s this afternoon. Pa is waiting for this letter to take to the office so I will say good bye – much love to you and from all –

and believe me always your loving sister, Lizzie

Published for the first time are these three letters from Elizabeth Colt’s household describing the Colt Armory Fire of 1864.  The first is from Mrs. William Jarvis, mother of Elizabeth Colt.  All are addressed to Hetty Jarvis, Elizabeth’s sister.   Elizabeth in her letters refers to “Dick.”  That is her brother Richard W.H. Jarvis, then Colt’s Vice-president and Chief Executive Officer.